The Lutron plugin supports connecting to any Caseta or RadioRA 2 capable Hubs. Only the “Pro” versions of these hubs support a home automation connection. The lesser versions will not work with this plugin.

The current version of the pluin is in Beta and incomplete. If there are specific features of the Hubs that you would like supported sooner please let me know and I’ll move them up my list.

The Lutron plugin is included with the XTension distribution as of version 9.4.16 so no further installation is necessary. 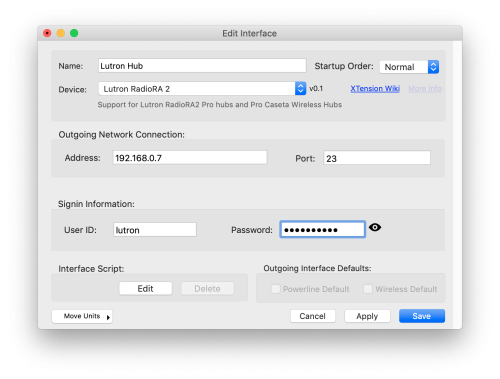 There may be configuration you need to setup on the Hub to enable their automation connection. You can also set a user/password different from the default. You may have to manually assign “integration id’s” to the devices on the Hub that you wish to be able to control from XTension.

The Hub must have a Static IP address assigned, or a DHCP reservation from your router so that XTension can always find it to talk to. Enter that address into the address field. The default port is 23 unless you have changed it in your Hub configuration.

Enter the userid and password that you have setup in your Hub. They default to “lutron” and “integration”

The integration XML data from the hub is not as complete as I would like and doesn’t allow me to automatically create all the units that you will need to interact with your Lutron Hub. Instead manually activate the switch or button that you’d like to create in XTension and at that point the unit corresponding to that switch or button will be created. You can then edit the unit in XTension to give it a more descriptive name and setup any other necessary unit settings such as if it’s a dimmable device or a motion sensor or other device type.

Most devices you will want to control can be setup as a generic “Output” type. In this case the Unit address will correspond to the Integration ID that was assigned in the Hub. If you created the unit by physically controlling the switch then the address will already be filled in. Once the unit is created you can set the dimmable property if the device is a dimmer.

Output devices support the “rate” parameter to the Turn On, Turn Off and Dim or Brighten commands. If included that value will be forwarded on to the Hub along with the command.

By clicking a button on any remote XTension will create a unit for that device. Initially the device type of the unit will just be “Device” you need to change that to “Button” in order for it to properly receive button push events. The Address will correspond to the Integration ID, a decimal, and then the device code for that button. So if the button code is 14 and the integration ID is 7 the Unit address in XTension would be 7.14 If you created the unit by clicking the button then it will already be filled in.

Some Hubs may also send additional commands for some buttons such as a hold or a double click. RadioRA2 devices do not support the double click, but both Caseta and RadioRA 2 hubs will send a hold event. You can trap this by creating a handler in the Unit’s On script such as:

If your Hub is one that will support the double click event you can create an identical handler but named “doubletap”. If your Hub does not support this action you can trap it yourself using the time delta of the unit to know what to do.

if you tap the button twice in less than 3 seconds then this will run the additional code that you place there. You can adjust the timing as necessary.

You can turn on and off the LED’s on a button pad by creating an LED device type. If some other command causes the LED’s to come on then the unit may be created automatically, but it’s more likely you’ll have to know the address of the LED on the specific remote that you need in order to create a unit for it. All the proper addresses are listed in the automation documentation available from Lutron.

To control the LED with a Component ID of 94 on a keypad with an integration ID of 7 you would create a unit, set it’s device type to LED and set it’s address to 7.94

A group can be either Occupied or Unoccupied. The Address of the group will be the Integration ID. Once choosing the device type of Group it will follow the state of the Group in the Hub.

Most other Lutron objects that use the Device command can be followed by creating a unit in XTension and setting it’s device type to “Device” the address will be the Integration ID, a decimal and then the Component ID. So if controlling the component of a device with integration id of 7 and a component id of 13 the XTension address would be “7.13”

Some device types may require special handling do to them sending non-standard values or extra parameters that would be useful. Please let me know if I can implement any further device types.

The Lutron Hubs support many other device types not limited to:

I will be implementing those over time, but if you would like a specific device type to be implemented sooner please let me know and I’ll move it up my list.

The Lutron plugin was first added to XTension in version 9.4.16