You are here: Macintosh Home Automation With XTension » Plugins » ZTroller 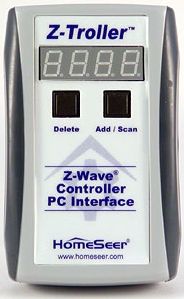 NOTE: The ZTroller plugin will not be rebuilt to support OSX Catalina and newer and will no longer be included in the distribution. If you are running Mojave or earlier and wish to continue to use the ZTroller plugin please download the Legacy Plugins file and use the “Install Plugin…” menu item from the Database menu to install it. This will install the plugin in your database and you can continue to use it as long as you do not update the OS past Mojave.

Z-Wave is a RF-based mesh networking technology where each node or device on the network is capable of sending and receiving commands through walls or floors and use intermediate nodes to route around household obstacles or radio dead spots that might occur in the home. Z-Wave devices can work individually or in groups, and can be programmed into scenes or events that trigger multiple devices, either automatically or via remote control.

Commands are sent via RF (avoiding the powerline conundrum), and are acknowledged by the addressed device. Although the speed of these commands is very fast, often only a few milliseconds, since commands may be relayed thru intermediate nodes, it can sometimes take seconds for commands to be completely acknowledged.

The RF band used by Z-Wave is 908.42Mhz, avoiding the more heavily used wifi band, but can experience interference from such things as in-home cordless telephones.

Z-Wave is supported by a huge number of product manufacturers and developers as you can see on the main Z-Wave Alliance website. http://www.z-wavealliance.org/modules/iaCM-MCL/

There are many websites with information about the fundamentals of Z-Wave, and the many devices that are available, so we will tailor this wiki around the use of Z-Wave with XTension.

How well does XTension support Z-Wave ?

XTension works with all of the Zensys-certified primary controllers. This is a specification that requires certification from the Z-Wave Alliance, and if the controller meets this certification, it should work with XTension. But please ask the 'xtensionlist' before purchasing any controller that is not listed here. For full featured ZWave support with security and ZWave 2 features please have a look at one of the newer ZWave plugins and consider a new device to run your network.

Controllers that are known to work well with XTension :

We also support the Leviton Vizia primary controller, but it uses a different controller-to-Mac protocol, so it requires a different 'handler'. The distinction is just a different choice of 'interface type' when you create a new interface in XTension(choose Vizia Z-wave, not Z-Wave).

When connected through the Vera interface all ZWave devices are supported. When connecting through one of the other supported interfaces we do not yet fully support the entire range of Z-Wave devices that are available on all interfaces. The rest of the interfaces are limited to only the non-security devices as the encryption system is not documented and only members of the ZWave consortium can view it.

Currently we support all of the Basic Class of device like dimmers and switches, and sensors. But except on the Vera, we do not yet support the more complex devices like Thermostats and Door Locks. The Vera interface supports both Thermostats and door locks which is why it’s the interface we most recommend.

Basically, if the device reports that it supports the Basic Set of commands, it will work with XTension. And this really includes most of the devices that are available.

An overview of what you need to do to get started

First thing to know about ZWave :

• You must have a 'remote' that can be carried to the location of a module for 'programming'.

• Next, you need a ZWave 'PC interface'. This will be connected to the Mac for use by XTension.

Next thing to know :

There are TWO significantly different groups of ZWave controllers.

Some interfaces support the “Zensys” controller to PC protocol

About Compatibility between Controllers and Modules :

All ZWave products are manufactured under license. All products must undergo some form of validation that they properly support the Zensys 'model'. Thus, theoretically, all ZWave 'modules' should work with any ZWave 'controller'.

• There is a very wide range of flexibility allowed in the Zensys 'model'. For example, one maker's appliance module may

• XTension does not support all of the different functions available in the Zensys model.

• XTension does support all the basic functions of the basic modules. ON/OFF/DIM/BRI, ADD/DELETE, POLL …

Setting up a ZWave network (simple) :

Setting up a ZWave network (Reality) :

• Every “Primary Controller” has a different procedure for setting up the network.

• You may have to 'Reset' the “Primary Controller” and start over. I did this a dozen times before I got the hang of it…

What interfaces are known to work?

Currently I have verified that XTension works with these interfaces :

• Homeseer ZTroller ~ $150 – Serial based, all in one, acts as both the Primary and Secondary controllers.

• AEON Labs Z-Stick II ~ $70 – USB based, all in one, acts as both the Primary and Secondary controllers.

What modules are known to work ?

I have only a few different basic modules, but have had no trouble getting any of them to work with any of the Interfaces above. James has some additional basic modules and they work for him.

• So, going out on a limb, I would say that ANY of the basic Appliance, Dimmer, wall switch modules Will work with XTension.

• If you decide to buy the VIZIA VRCOP secondary interface, you must also buy the VRCPG hand-held Primary Controller.

• There are MANY ZWave devices, from many manufacturers. Some of these have very complex operating protocols

• Prices are coming down ! We recently saw a sale of 10 Appliance or Dimmer modules for $100… that's very close to X10 prices ! • Prices vary Greatly between sources… Look around, ask the List, Don't Buy until you're sure… • I like HomeSeer … good specials. • I like Worthington Distribution … good guys for any home automation products. • ZWave World sometimes has good deals.

WHAT Interface to buy :