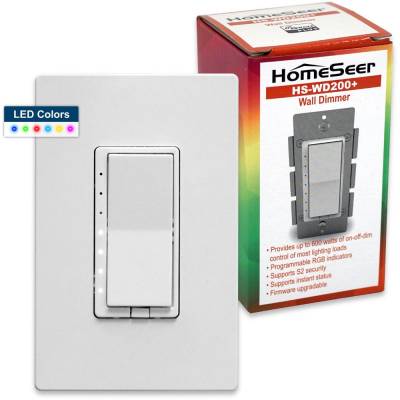 The HS-WD200+ is Home Seer’s latest wall dimmer. In addition to all the commands and support of the WD100+ dimmer it adds 2 more central scene gestures. Note that the gesture codes are different between the 2 switches however. It can send us the 4 click and the 5 click gestures. See the article on the WD100 for more info on it’s central scene handling and how to work with that in XTension.

NOTE: as of Vera firmware version 1.7.4452 Vera Edge / 1.7.4453 Vera Plus / 1.7.4454 Vera Secure they have changed the gesture codes that are received from this switch. They are now the same as they were for the WD100+ dimmers with the addition of the extra multi-click supported.

The available Central Scene gesture codes on the WD200+ dimmers are:

The button code of the UP paddle is always 1 and the down paddle 2 so the combination of those two data points will let you trap any gesture from either paddle and perform different actions based on them.

The single click always controls the local load, but the other multi-clicks do not control the local load but only send the centra scene event. If you wish to do a sort of “all off” with a double click down you will have to script the changing of the load as well.

Hubitat Notes: Note that with the current built in driver on the hubitat only tap and double tap are available. I am looking into the possibility of using a user created driver or creating one myself that will properly support that for us. At the moment you are limited to that.

Controlling the RGB LED’s with a Hubitat

The hubitat and the vera have incompatible ways of sending such commands to the device so you must use a different method for the hubitat than the Vera did.

First make sure that the device in the Hubitat is setup to be using the built in Home Seer WD200+ Dimmer driver. Then make sure that the switch in the control page under preferences for that device labeled “Enable Status LEDs” is turned on and save the configuration if necessary.

The scripting command we use to send these commands is sendDeviceCommand which is sent directly to the unit like this:

you will pass 2 parameters to the command as in the above example. The first is always the string “setStatusLED” and capitalization matters. The second is a comma separated list of 3 values. it is important that you not place any spaces in this list The first parameter is the LED number which should be 1-7. The second can be either a number or the name of the color. The valid values are: 0 or off, 1 or red, 2 or green, 3 or blue, 4 or magenta, 5 or yellow, 6 or cyan, 7 or white. The third is whether or not the led should blink. It must be either 0 or 1, or, on or off. Remember not to put any spaces in this list or the command will not be sent.

I have had a very issues with this. With the built in driver I cannot reliably get the indicator LED to stay off when no status LED’s are on. It may be necessary to use a user version of the device driver for this. I am still looking into that.

Controlling the RGB LED’s on the Vera

The other new feature of the WD200+ is the ability to change the color of the LED’s that display the level, or to control the color and the flashing of them individually to give a status display. XTension 9.4.6 adds support for changing all those settings via the new setData command

This is a low level command that sets parameter or variable data directly in the devices memory. If you get the parameter index wring or send bogus data it is entirely possible to brick the dimmer or cause other problems. If you send a command meant for one kind of device to one that doesn’t support that the results will be unpredictable at best. XTension so far does no validation of the data being sent.

The format of the Set Data command is this:

to change the default color of the LED’s in the WD200 to blue you’d issue a command to parameter 14 with a single byte of data indicating the color, something like:

valid values for the color data are:

The User Manual lists many parameters I’ll include the most useful ones in this table. All parameters are single bytes so the middle value in the SetData command for all these would be 1. Be careful when sending these commands. All manufacturers and possibly different models of the same switch may have different parameters for the same functions. Sending an out of range or incorrect value to a parameter could have unpredictable results or could brick your switch. It’s nice to note however that the WD100 an WD200 share the same parameter number for orientation and it’s other parameters go up through 10, the other WD200 parameters start at 11 so if you confuse the 2 device types when setting data they happily ignore the out of range parameters and do not do anything damaging.

Turning off all the lights

While there doesn’t seem to be a way to make the lights not show at all you can now do that with the status mode. Turnon the status mode instead of the level mode and just set every LED to off.