You are here: Macintosh Home Automation With XTension » Plugins » Ad2usb 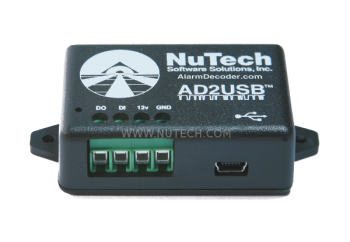 The AD2USB device provides a computer interface to many Admeco and Honeywell brand alarm systems. It lets you get all your wireless devices into XTension as well as your zones and alarm state. More information on what is supported and what is possible at their homepage alarmdecoder.com This would also work with their “ad2serial” with a serial adaptor.

XTension’s support for this device is in early alpha stage at this moment and first appears in XTension build 860. The support is incomplete but is under active development and it is already in a usable state. Currently supported devices and how to configure them in XTension follow.

If you have zone expanders attached to your system you may trap these channels separate from any zone or other message. Create units in XTension with the address starting with “EXP” followed by the 2 digit expander address and then the 2 digit expander channel. For example: EXP0301 would be a unit that corresponds to channel 1 of expander at address 3. That unit will follow the alarm/safe state of that channel. This is a read only unit, you cannot set off the channel by controlling the unit in XTension.

Any wireless device attached to the system can be followed in XTension. This is very useful for motion sensors, door sensors and even remote controls. It’s more complicated to setup since more information is included in the address. But you can just trigger the device you wish to track and check the log or the “alien addresses” window in XTension to find the exact address string you need to use. The address must begin with the string “RFX” followed by the 7 character device serial number and lastly by the loop number that it corresponds to. Devices may have more than one function which the alarm calls different “loops” if you have a remote with multiple buttons they may be different loops. The alarm panels support loop1 through loop4. If you dont know what loop your remote sensor is setup as then just watch the alien address window as you trigger it to see the proper setting. For example: an XTension unit with the address of “RFX0307823LOOP1” would correspond to a device with the serial number 0307823 and the loop1 switch or sensor.

Prior to XTension version 9.4 only zones actually reported as faulted would send commands to XTension. Other zone messages were ignored. This means that if you had created a non-fault zone for some other kind of sensor that zone would not have updated in XTension. In version 9.4 I changed the zone handling so that non-fault zones that send an alarm message will also update their XTension units when they are alarmed.

The AD2USB can be configured to act like any number of “virtual” zone expanders. XTension can control these zones and send that information into the alarm panel for many purposes. If you have X10 or ZWave or other sensors or logic that you’d like wired into the panel this is the way to do that through logic in XTension. The initial setup of the virtual zone expander must be done with the AD2USB configuration software or directly through the console, but once that is done you can create units in XTension who’s address start with “VZONE” and then the 2 digits of the virtual zone. For example a unit in XTension addressed as “VZONE41” would send alarm/safe data into the alarm panel for zone 41.

You can create units that correspond to pressing the 4 function keys on the alarm keypads. Be careful about this however depending on what you have them configured to do, the local police and fire may charge you for excessive false alarms. Create units in XTension with the address of “FK1” for function key 1, “FK2”, “FK3”, and “FK4” turning them on in XTension is the same as pressing the button on the keypad.

In the setup page of the preferences in XTension when configuring the device you have the option of turning on a passthrough server for the data read from the port. This can be used to connect the “virtual keypad” application from another machine or other application.

At this moment there is no communication from XTension INTO the panel except the function keys and the virtual zones. Otherwise we can monitor things quite well. Future versions will bring more abilities for control. There remain questions about the clearing of the zones, they may read alarmed after the zone has cleared if other zones are still faulted, or they may clear immediately after faulting. This software doesn’t currently support the idea of “partitions” with separate pin codes. If your setup is configured into partitions this may or may not be useful for you yet.

Added in XTension version 9.4 the AD2USB interface will now send a reboot message to the device if you use the Initialize Controller verb in a script.