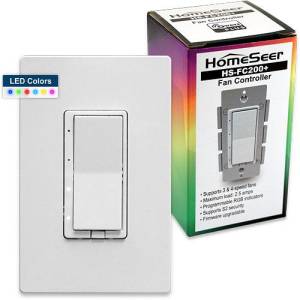 The Home Seer FC200 ZWave Plus fan controller is capable of 4 fan speeds and all the same gesture information as the WD200+ dimmer. You can also individually control the color of it’s 4 LED’s. See that article for more info on capturing the central scene output and setting the colors of the LED’s

By default the FC200 ships with only 3 fan speeds as that seems to be the default for other devices. You can turn on the 4 speeds by issuing this command from XTension’s command line:

Another nice feature of this speed controller is that the max amps of the fans is 2.5 amps. This is higher than some other fan speed controllers I have used. If you’re maxing that out for multiple fans then you may find the low speed a little comical and you’re going to want to definitely enable the 4 speeds so you can get a decent medium speed out of it.

This table is reproduced from the documentation for the switch available on the HomeSeer site. Please verify that your controller is of a firmware version that is compatible with this information before using the setData command or at the very least it will do nothing and at the worst you could brick your switch.